First Day of Work is a variety show that allows celebrities to experience working in other fields of work. In the latest episode, VIXX’s N and Yoo Byung Jae made an appearance and were chosen to work for a women’s underwear brand.

A conversation between the two entertainers have become a hot issue in Korea, receiving a massive amount of criticism from Korean netizens.

Below are captions describing scenes that have gone under fire from netizens, translations provided by Koreaboo below:

►  Yoo Byung Jae replies that he was first in his year in high school as well.

►  N keeps asking him, “Really? In high school? You’re not lying? Really?” (He sounded very proud when he mentioned that he was first in high school, but with Yoo Byung Jae, he sounded sarcastic and as if he couldn’t believe it)

►  Yoo Byung Jae gets slightly mad and says, “What do you take me for”

►  N keeps asking Yoo Byung Jae if he really was first in his year.

►  Yoo Byung Jae in turn asks if N was telling the truth as well. N says, “Yes,” in a very serious voice.

►  One of the staff says Yoo Byung Jae got a perfect score on the math section of the university entrance exams.

►  N doubts that as well and keeps confirming with Yoo Byung Jae.

►  N sounds condescending and arrogant throughout the conversation.

Following the airing of the episode, a netizen began comparing N’s and Yoo Byung Jae’s universities, coming to a conclusion that N attended a small university, while Yoo Byung Jae attended an acclaim university. Thus N became scrutinized by netizens for his alleged arrogance and rudeness, citing he cannot speak to an elder politely. 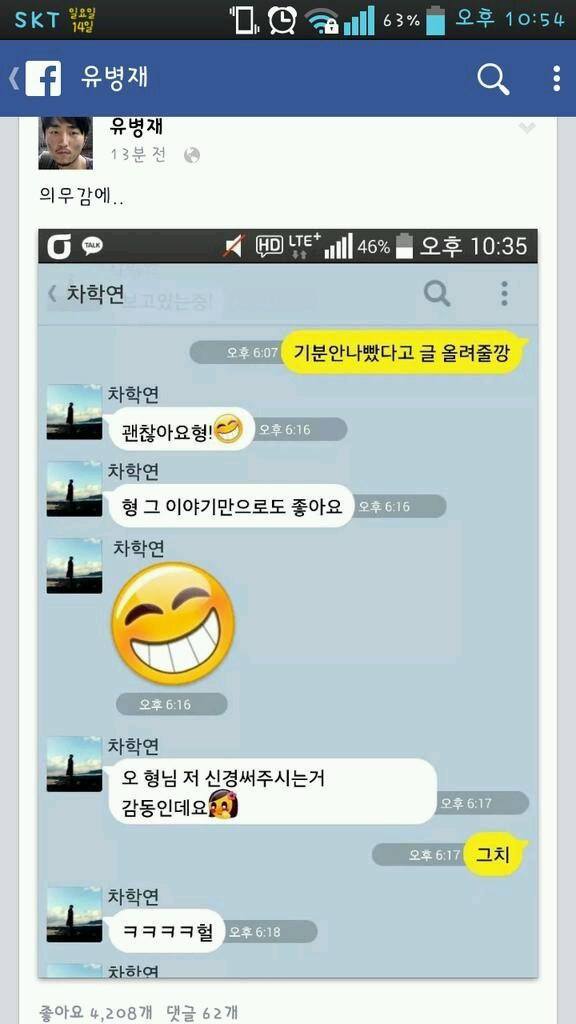 Following the mass criticism of N’s and Yoo Byung Jae’s scene at the brand’s store, it was revealed that the situation was staged. Yoo Byung Jae shared a caption between the two entertainment as proof via his Facebook page.

Facebook status: I feel like I have the responsibility to upload this…
Yoo Byung Jae: Should I upload saying that I didn’t really feel insulted?
N: It’s okay hyung
N: I’m just happy to hear you say that
N: 😀
N: I’m touched that you would care for me so much
Yoo Byung Jae: Right?
N: Hul ㅋㅋㅋㅋㅋ

Since the situation was revealed to have been staged, and the two bore no ill feelings against one another, criticism by netizens have since then died down.