Xenophobia is present at Columbia University as Asians students attending the University have reported experiences of dorm room vandalism.

Columbia University’s Office of Multicultural Affairs has recently received several reports of vandalism occurring at the college. Several Asian students with non-western, and particularly East Asian names have reported that their names have been ripped off of the plates from dormitory doors. Many students were affected, including both Asian-American and International students.

The culprit or culprits seemed to primarily focus on name tags that appeared to be distinctly non-Western. 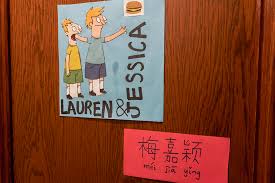 The vandalism caught the attention of the Associate Dean of Multicultural Affairs Melinda Aquino, prompting her to send a mass email in which she offered support to the affected students.

After the letter had been sent out, the Asian American Alliance released a statement in which they condemned the vandalism and said these acts were “xenophobic efforts to divide and incite fear among Columbia’s Asian and Asian American community.”

Several other groups of students at the University have spoken out against the incidents taking places, such as the Korean Students Association and Asian Pacific American Heritage Month.The groups got together and  released a joint statement regarding the matter.

“As a result, we, the Columbia University Asian American Alliance, and the below signatories, condemn these recent incidents as a racist and unacceptable attempt to alienate this school’s international and domestic Asian and Asian American community. This statement represents our rejection of acts of bigotry and intimidation both on this campus and in the larger world today.”

The Asian student body at Columbia University have united with one another and are offering out support to those affected and are determined to bring change to the incidents that have been taking place at the college and the world.