Wu Yifan’s (Kris) upcoming movie Somewhere Only We Know will hit the big screen not only in China but in multiple theaters around the world.

Fans have been waiting in anticipation for Wu Yifan’s activities after his departure from the group EXO and the filing of his lawsuit towards SM Entertainment. Despite this, fans have continued to follow Wu Yifan’s activities in China such as his upcoming movie Somewhere Only We Know. After much excitement, director Xu Jinglei announced that the movie will be released in other cities around the world.

Through her Instagram account, Xu Jinglei uploaded a photo with the main cast members announcing that the movie will be released on February 14th, 2015, Valentines Day, in the United States. The movie will be available in select AMC theaters.

Meanwhile Lion Film Entertainment’s president, Jiang Yan Ming announced on his Weibo account, “Compared to many Hollywood films, this is a much smaller scale, but in terms of a foreign language film being released in another country, it is not so small. There is also a possibility of 30 more cities!” He followed this saying, “North America, Australia, and New Zealand are definitely on!” 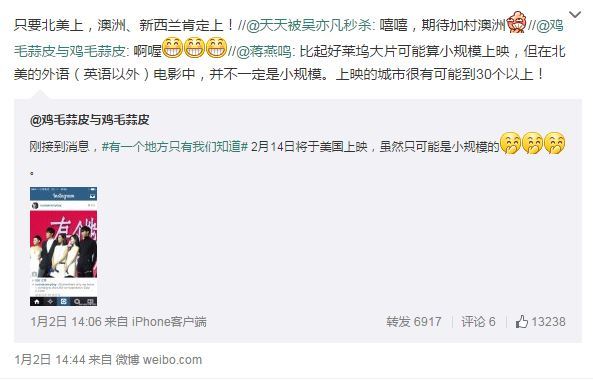 Meanwhile check out the second official trailer for “Somewhere Only We Know” below!

TWICE’s Chaeyoung Posts An Adorable Tribute To Her Bestie Somi

TWICE’s Nayeon Had A Tough Time Learning The “POP!” Choreography—But Her Innate Talent Won Out