HIGHLIGHT’s concert at Gwangju Women’s University was all but a nightmare for fans and the group itself. Since the concert, fans have been very vocal about their frustration with not only the management company but many of their fellow concert goers as well.

Below is a list of incidents that occurred at the concert and caused chaos.

1. Free tickets were handed out

HIGHLIGHT’s concert was held at Gwangju Women’s University and was hosted by a company called gmFactory. The company allegedly gave out approximately 75 free tickets on a first-come-first-served basis on the university campus They allowed each person to take up to 2 tickets (150 seats total). These free tickets were only meant to provide entry to the third floor of the venue.

HIGHLIGHT’s agency, AroundUs Entertainment, had no idea of this “event” and found out that gmFactory had distributed the tickets outside of their designated ticket selling locations without a prior agreement. For example, one student said that she received free tickets to the concert through a bartender at a bar.

“I was drinking a coctail when suddenly the bartender gave me 200,000 KRW’s worth of tickets. #Isawacelebrity #highlight”

Due to this, some university students who weren’t HIGHLIGHT fans decided to sell their free tickets on their social media accounts.

“I’m a Gwangju Women’s University student. I’m not a fan so instead of me just standing around, I think it’s right for a fan to attend so I’m looking for someone to take these tickets off me. I haven’t received the tickets yet, so you’ll have to go to Gwangju Women’s University and get it directly from them. Only people who can do this, please contact me! I’m selling both tickets for 90,000 KRW ($80 USD).”

2. People behaved rudely at the concert

Fans at the concert claim that those who were invited or received free tickets to the concert showed no support for HIGHLIGHT. It’s considered polite to stay until the end and show support for the performing artists—instead, many of the university students left the concert grounds while covering their ears and barely clapped. 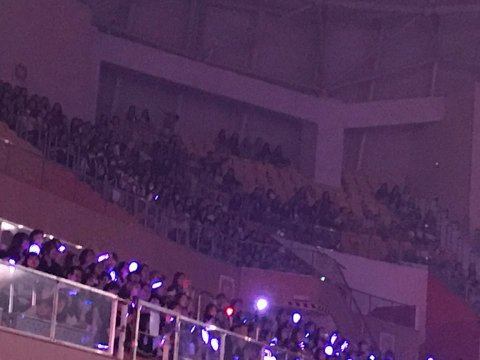 Not only that, but they also brought in alcoholic drinks and food, then littered at the concert venue before leaving. Some even brought in chicken and beer and started eating it loudly during the concert. It’s common courtesy not to bring any kind of food and drink into concert venues. 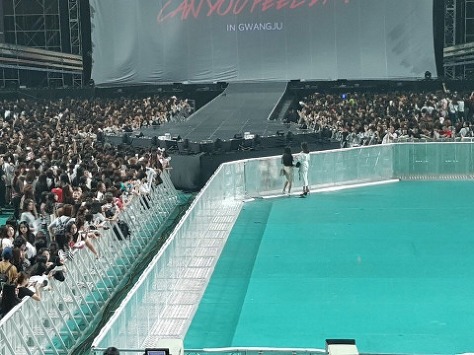 If that wasn’t enough, some parents had even brought their infant child to the concert, snuck into the standing grounds, and let their child ride on their shoulder, blocking fans’ views. Others didn’t even pay attention to the concert but took selfies or played another artist’s songs on their phone. 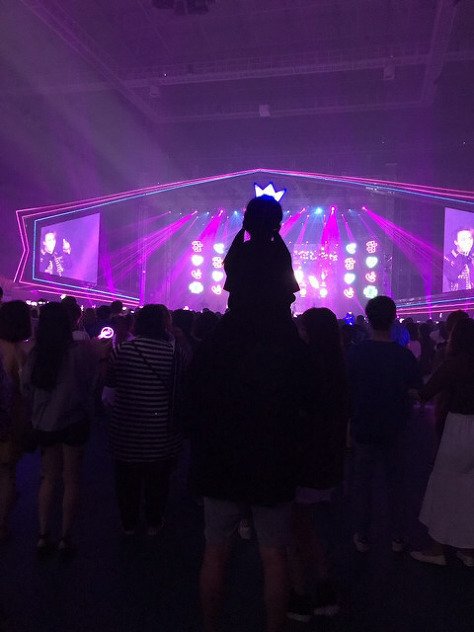 3. University students were hired as staff

Instead of hiring professional staff for the concert, students at Gwangju Women’s University and other nearby universities were hired as concert staff and bodyguards. As fans and students tried to enter the concert venue, the staff became flustered and struggled with their jobs.

As the starting time came to a close, the staff still hadn’t sent in any of the fans due to the lack of organization in entering them. In the end, the bodyguards and staff asked each attendee for their ticket number and attempted to organize them in order. 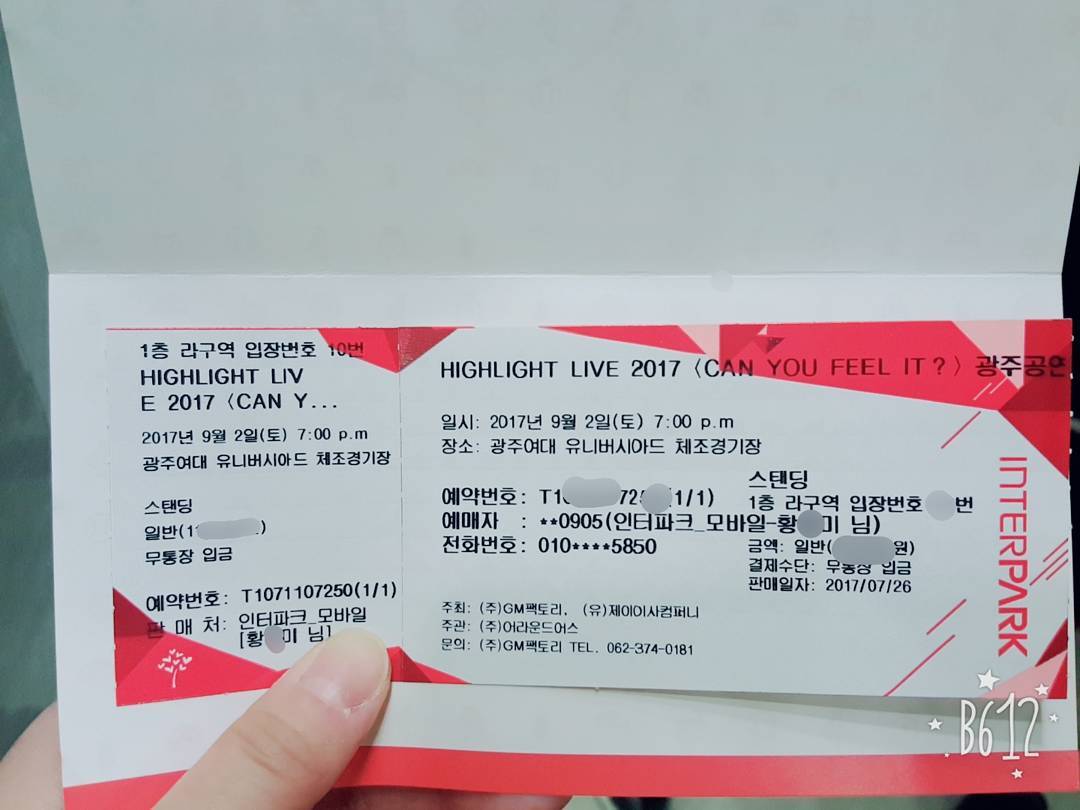 Despite the fact that two hours had passed since the doors opened, none of the fans were organized into the correct lines, but since they had 10 minutes before the start of the concert, ticket holders were let into the venue randomly.

After the concert started, the staff and bodyguards stopped doing their jobs and instead, stood in the standing area as part of the audience. They were seen taking videos and photos of the concert instead of staying in their designated areas. 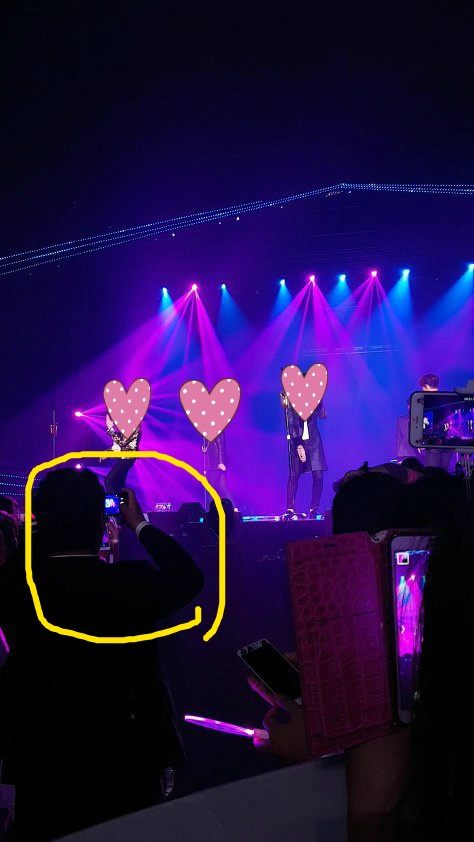 One HIGHLIGHT fan shared her account of having her bra strap pulled until it broke loose. She had been standing near the fence in the standing area when someone suddenly pulled her strap and ran away.

“I’m looking for the person who pulled my bra strap near the fence in the standing area and ran away at HIGHLIGHT’s Gwangju concert today ^^ My chest was feeling stuffy so thank you for breaking it f**k ㅎㅎ I would really like to repay you! Please DM me if it’s you❤️” 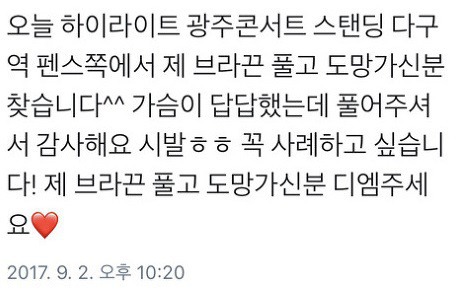 Many of the free concert goers were spotted talking about HIGHLIGHT and making rude comments about them. As a fan who paid tickets to go to their favorite group’s concert, hearing a non-fan (muggle) who attended the concert for free talking badly about the group can be understandably infuriating.

“F**k that muggle guy who pulled a girl’s bra strap and left. Oh and f**k that girl who said Yoseop seemed gay when he said ‘I love you’. Are you crazy? Why did even go, seriously? Ah… I’m so f**king mad #gmFactory_apologize” 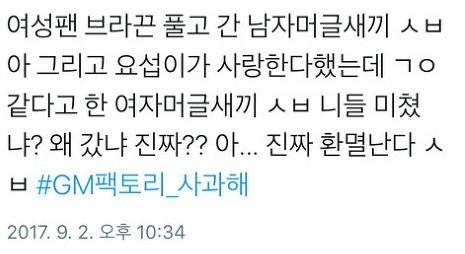 Despite the plethora of evidence, gmFactory continued to deny that any free tickets were given out whenever fans called to ask them about it. When gmFactory released their “apology”, there was no mention of the free tickets at all. They only apologized for some minor issues at the concert.

I would like to apologize for the problems with organization at HIGHLIGHT’s Gwangju concert today. First, we checked with the security guards at the venue about the two women who pre-entered the 1st floor standing area, and realized that they had tricked them into thinking they were concert staff.

As the concert’s organization didn’t go as planned, I apologize to those who bought their tickets for infringing on your rights and causing an inconvenience.

Also, in regards to the woman who brought in beer to the venue, we admit it was our fault for being negligent in checking people’s things as we wanted to speed up the entry process.

In addition, I would also like to sincerely apologize to all the fans for the security guards’ behavior as they acted like concert goers rather than guards whose priority was to ensure the safety of the audience.

I apologize again to the members of HIGHLIGHT, the staff of AroundUs Entertainment, and their fandom LIGHTS for making a happy concert memory into an unhappy one.” 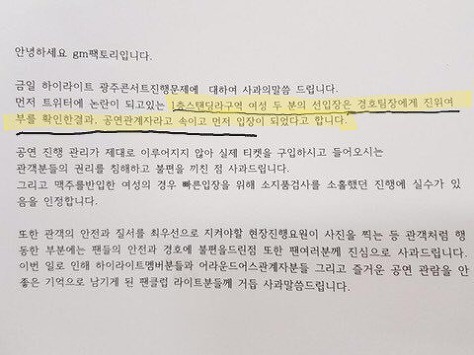 Despite the lack of organization at their concert, HIGHLIGHT still genuinely thanked everyone for coming and showed what it meant to be a true professional.

“Thank you Gwangju. There were a lot of happenings but thank you for enjoying it until the end. We’ll definitely return!!”