Actors Lee Jong Suk and Park Shin Hye pose together as they ask fans and viewers to support their upcoming drama, Pinocchio, which is set to air later today on November 12th on SBS.

The two stars posed intimately together to ask fans to support their premiereepisode  tomorrow night as Park Shin Hye writes “Wednesday, November 12 ‘Pinocchio’ first broadcast! bonbang-shoot” on a sketch pad as she and Lee Jong Suk lean amiably toward each other.

Pinocchio tells the story of a woman who has Pinocchio syndrome (hiccuping when she lies) who aspires to become a famous reporter, and a man who has a handsome appearance despite his ragged hair and poor fashion sense. Park Shin Hye outlined the main points of this drama, with an interview, teasers and still cuts also previously released for this drama. 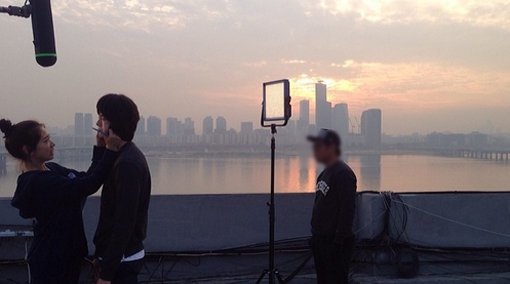 Source: Sports Donga and My Daily