A well-known Korean comedian and gagman was recently arrested for sexually assaulting a man.

On May 17th, comedian Baek Jae Hyun was arrested for sexually assaulting a man with a personnel from the Seoul, Hyehwa Police telling Daily Sports on the 20th that “We received a report from the victim of Baek Jae Hyun’s sexual assault on May 17th and began investigations. He admitted his fault and was booked without physical detention and released. He, however, stated that he is not homosexual but simply made a mistake on an impulse.”

According to the official, Baek Jae Hyun sexually assaulted “A,” who was sleeping at a local sauna on May 17th. His actions including touching “A’s” genitals with his hands among other sexual things. 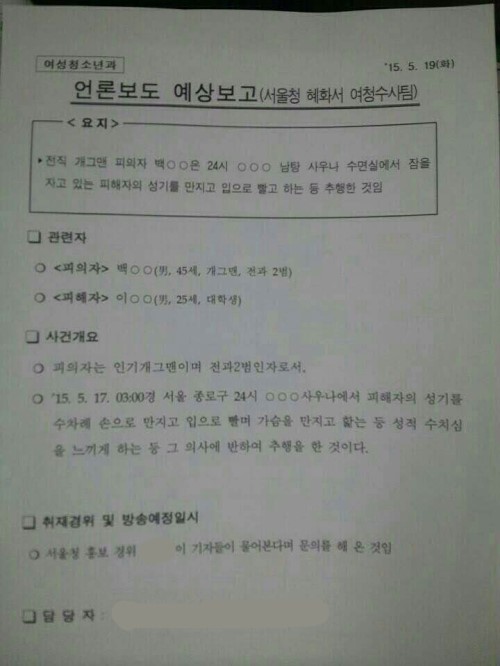 In the police statement it states, “15.5.17 approximately 03:00 o’clock at a OOO 24 hours sauna located in Seoul Jongro, the culprit touched the victim’s genitals multiple times with his hand and sucked it with his mouth. He also touched and licked his chests and shamed him sexually without consent.”