In the midst of Girl’s Day members’ rude behaviors on KoonTV, Hyeri‘s past alleged rude action towards BEAST emerged during the 2014 MelOn Music Awards.

As all of the Korean media portals have been flooded by reports of the alleged rude behaviors on KoonTV (video), Hyeri’s past alleged rude actions emerged again in media and among netizens.

During the Melon Music Award last year, Hyeri was seen playing around during BEAST member Dongwoon‘s speech after receiving the award. Hyeri was seen supposedly mimicking Dongwoon’s speech while joking around with members.

At the time, Dongwoon in his speech stated, “Thank you for all of the fans that have voted for us out of many deserving nominations. We will do our best to become widely known singers.”

When the camera was on Girl’s Day member Hyeri, she was seen mimicking Dongwoon’s gestures while laughing and murmuring his speech stating, “…We will do our best to become widely known singers.”

Many fans of BEAST saw this as rude and the controversy magnified quickly. 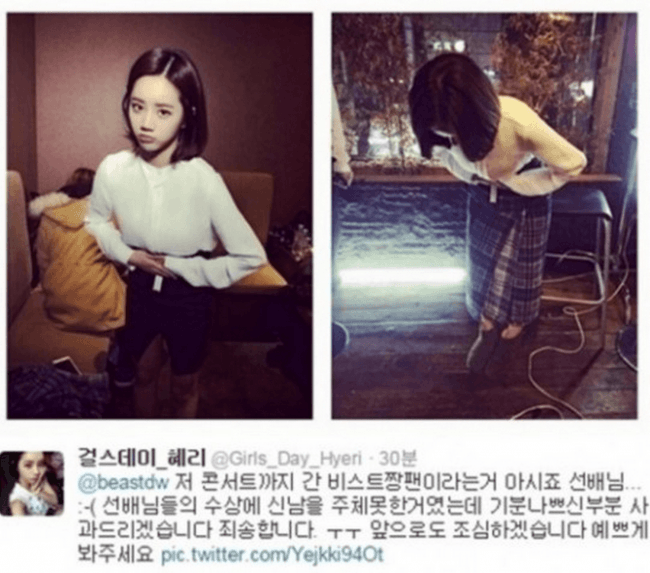 After things escalated quickly, Hyeri apologized through a photo post on her SNS account which had to be taken down after many fans saw it as insincere.

Since the controversy has escalated, the MC host Choi Koon has responded to the recent Girl’s Day controversy.