‼️WARNING: This article contains graphic photos of the victim and video from the brutal attack on her.

Another student was revealed to have been a victim of severe bullying, this time by her own “friends”. 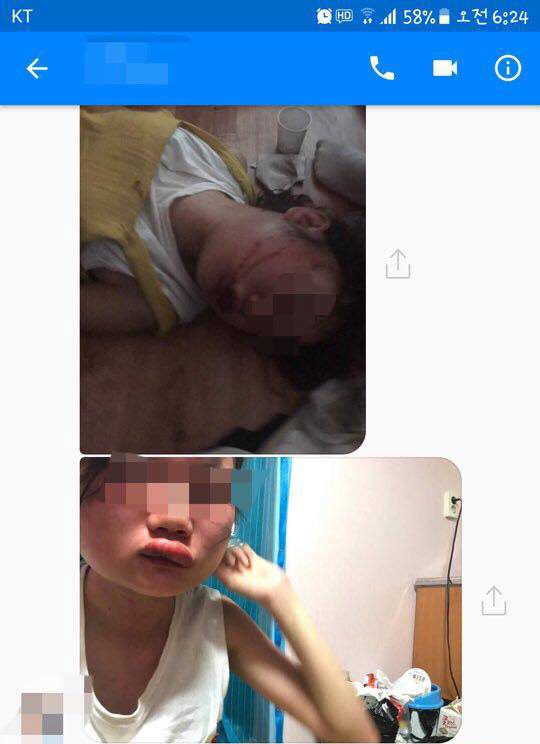 The victim’s older sister publicly shared their side of the story after the Busan bullying incident went viral.

“Hello, after reading about the Busan bullying incident, I contemplated and mustered up the courage to upload this.

This is to prevent further damage, and to abolish the Juvenile Act.

After reading about that incident, I thought I should share my younger sister’s incident too.

In the beginning, I wasn’t going to out of consideration for my younger sister, but I just couldn’t stand the lack of remorse from the bullies who committed such an inhumane crime, and their proud attitudes.

The incident happened two months ago on July 17, where my little sister and the bullies went to drink alcohol at Gangreung’s Kyungpo Beach at 3 A.M.

(I understand my sister is underage and she shouldn’t have drank alcohol at that age. I apologize.)

While drinking with them, ‘A’ and my sister said they had some issues to talk about and that they would be back after talking 1 on 1, so they told their 5 other friends not to follow them, but they did anyway.

During their conversation, ‘A’ got emotional from the alcohol and hit my sister first.

But right afterwards, the two apologized to each other and resolved the issue, but the other five students told A to move and said that they had some issues with my sister, so they started venting their frustrations onto her too.

‘A’ had already gone home at that point, and before she left, she told the other 5 to be gentle.

That was the starting point of the incident.

The five remaining bullies moved locations several times, all while physically hitting my sister, spitting on her face, cursing at her, stealing her phone and wallet, then hiding it in the sand.

As soon as day broke, they took her to one of the students’ studios and continuously attacked her, and they even video called an older guy and showed him the attack.

They then shot a video and shared it in their group chat, and took photos and shared them too.

Also, they brought scissors and threatened her with it, telling her that if she reported them, they would kill me.

They also tried to undress her and make derogatory sexual jokes.

The next day, ‘A’ saw the photos of my beaten up sister and saw how severe it was, so she skipped school and went to the house, but saw them drinking alcohol and attacking her again, so she brought some porridge and tried feeding it to my sister, but the other kids said ‘Why would you give her that, what a waste of money’ and said she should give it to them instead.

They also looked at my sister’s face and said ‘Ew look at her face, how disgusting’.

After that, they planned to go to the beach, but ‘A’ said she’ll take my sister home, but the bully next to her said, ‘If she goes home, she’s going to report us, so let’s just tie her up in the bathroom’.

The other bullies dissuaded them from doing that, and I’m not sure if it’s because my sister was scared to come home, but she told ‘A’ that she’ll rest underneath the parasols and went to Namae Beach.

There, my sister lost consciousness and stopped breathing, to which my friend who works there found her, called the ambulance, and reported the bullies to the police.

The main reason I’m so angry is that they did all of this but they don’t feel any guilt or remorse, in that they’re still sharing photos of them drinking alcohol to their Facebooks and acting like nothing happened.

They called my friend and cursed at her too, and sent me threatening messages.

They’ve also been telling others that they hit my sister because she did something wrong.

Please look at the photos below for details about their brutality, and please share this post, I beg of you.

My sister is currently at a psychiatric ward receiving treatment.

I hope this post spreads so that the Korean Juvenile Act can be abolished so that they can receive the appropriate punishment, in light of the Busan bullying incident too.

After the victim’s sister’s post went viral, those who knew the bullies or were indirectly involved in the incident came forward and shared screenshots of the bullies’ group chat.

“Excuse me.. I’m contacting you in regards to that incident but one of the bullies is my friend’s cousin, and they’re all meeting together to match up their stories, and I thought I should let you know.”

The messages were beyond horrific, and it truly showed that the attackers had no sense of guilt or remorse.

Attacker 1: If she posts that, she’s also going to get f**ked.

Attacker 2: Why? Our identities are all going to be revealed.

Attacker 1: We can report her too

Attacker 3: What will that do, it’ll spread all over the city

Attacker 1: It doesn’t matter. It’s all going to pass. Later it’ll just get buried. I’m going to request for compensation in psychological damage.

Attacker 3: But for some reason I feel like [censored] is going to talk about what we did for the rest of her life. 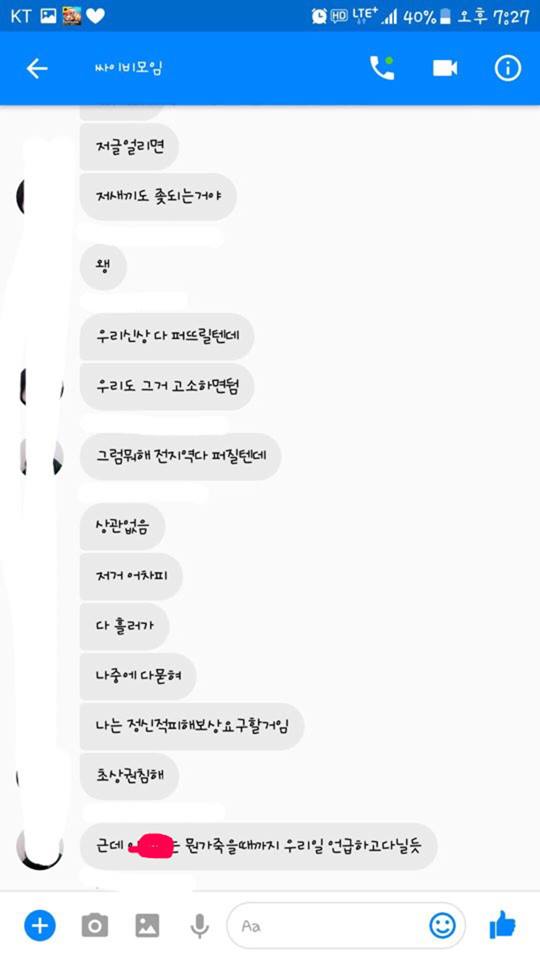 Attacker 2: Hey, our photos are going to come up now

We should report that to the police before they come up.

Attacker 1: I’m so f**king pissed off. Why is everyone giving us sh*t 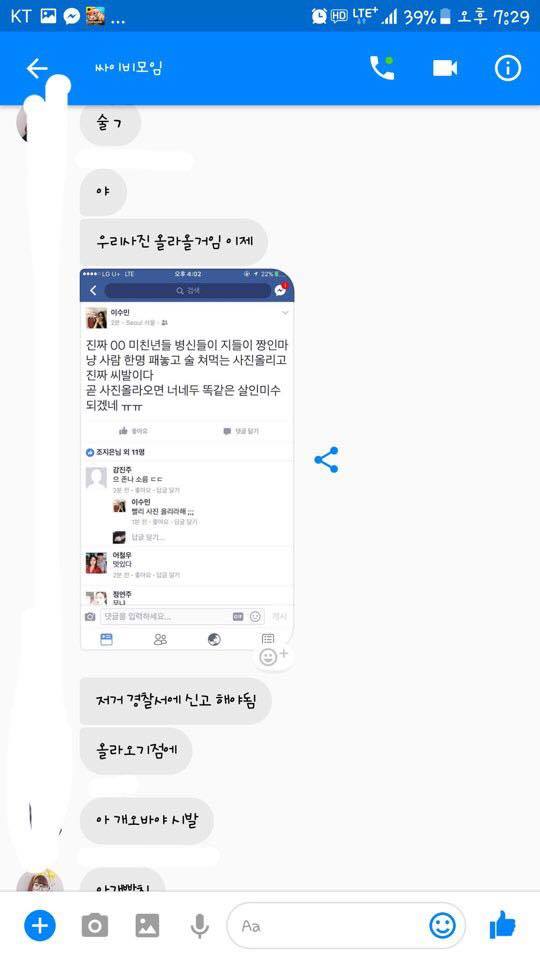 Attacker 1: But are our faces and names going to be revealed to the whole country?

Attacker 2: Wow I’m going to get so many followers and become a Facebook star

Attacker 4: We should just die before that happens 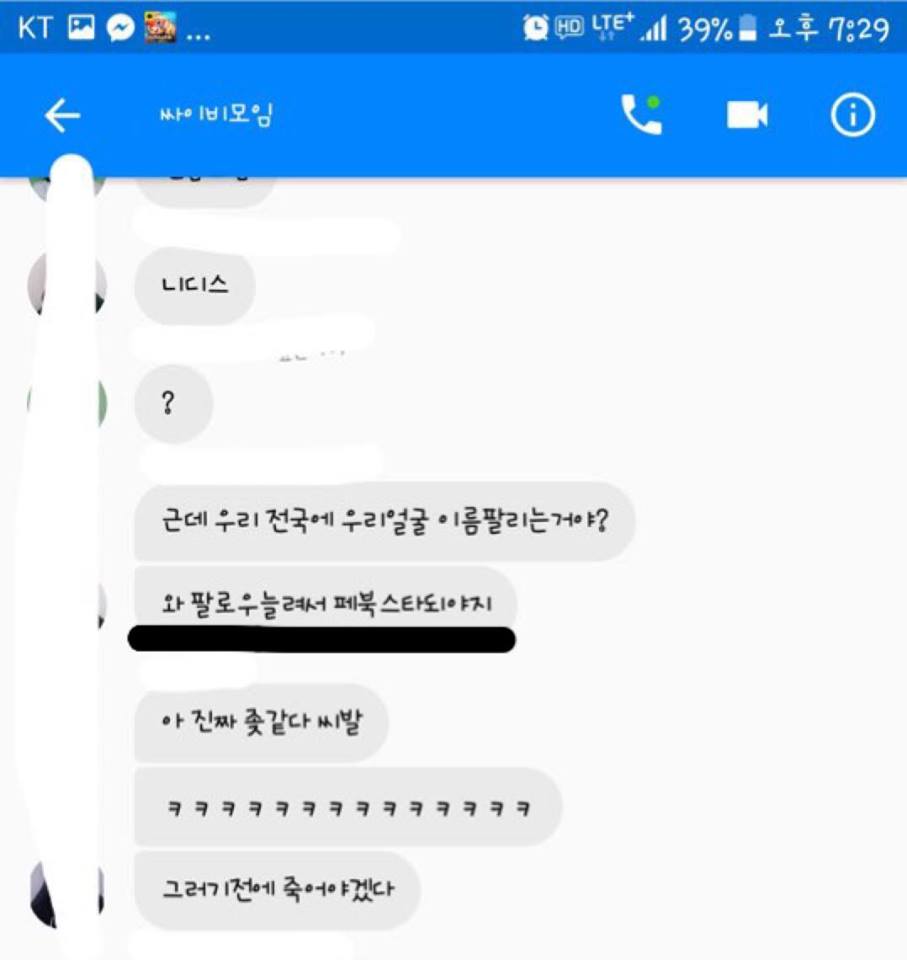 Shortly after, one of the attackers came forth on Facebook and posted a public “apology” full of excuses and lies.

Honestly, we wouldn’t thoughtlessly beat up our friend’s face to make her look like half a r*tard.

At first, we drank alcohol at Kyungpo, but she got into an argument with one of our friends so they said they wanted just the two of them to talk, but we decided to follow them to keep watch.

Our friend hit her a few times but they talked and worked it out, but the five of us also had a lot on our chest so we decided to talk too.

So we did that first, and Lee Haneul had nowhere to stay so one friend let her stay at her place and pay half the rent.

But on the day that Haneul had to pay rent, she took her belongings and moved to another place without paying the rent.

She also cursed about her friend to the friend’s mother so we hit her.

At a young age, I got pregnant and had a baby.

It’s not something to brag about, but I was scared of rumors spreading, so I stayed in a different city until I had the baby and came down to Gangreung, but the rumors had spread.

So I consulted Lee Haneul right before my abortion, telling her that I was so scared and that I was embarrassed to be having a baby.

I trusted her, but she told all her friends, and I was really disappointed in her. So under the influence, I hit her until she apologized, and I’m really sorry for that.

The reason why the others hit Haneul was because Haneul called her an ATM and said that her money wasn’t valuable while hers was.

She stole her money and proudly used it as her own, so she hit her.

We were friends at one point, but it was so severe that I was really scared.

Another friend and dongsaeng decided to go to a pub to drink, but while they were drinking, Haneul suddenly left and pretended like she didn’t drink any, but the way she said it to the unnis was too rude, and that’s why I think they hit them..

Thank you for reading this long post. And I’m sorry for disappointing you.” 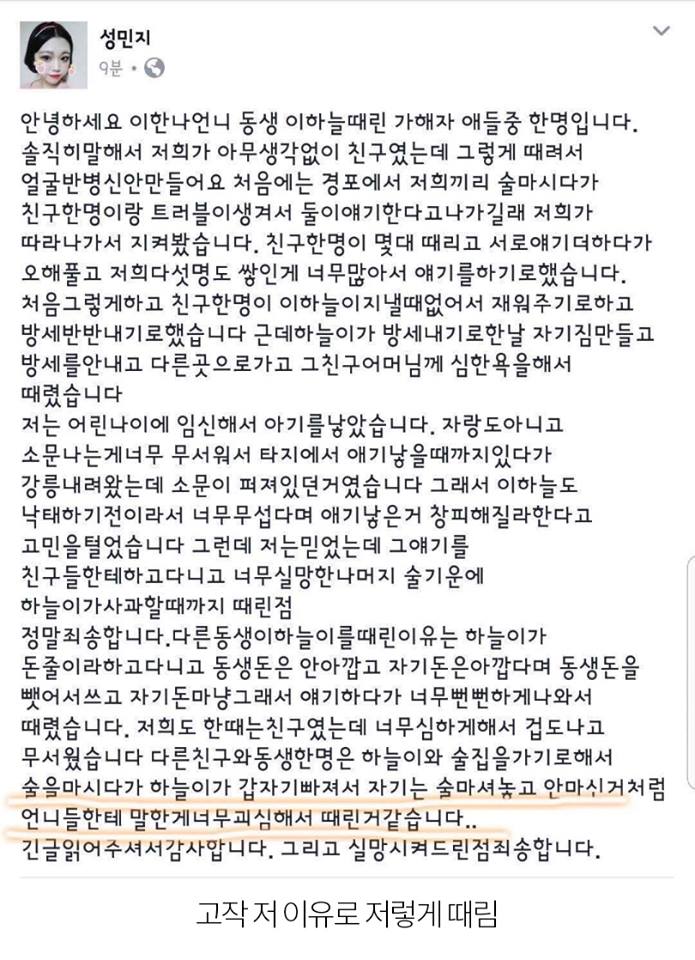 Upon reading one of the attacker’s “apology”, Korean netizens became even more infuriated, as she merely explained why she attacked the victim instead of sincerely apologizing and reflecting on her actions. 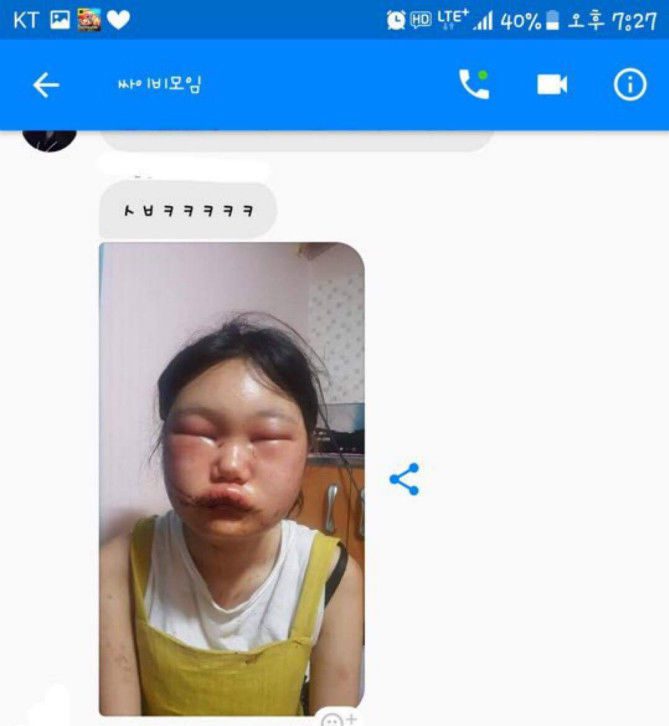 To everyone’s disappointment, however, there hasn’t been much progress in the investigation of the attackers. 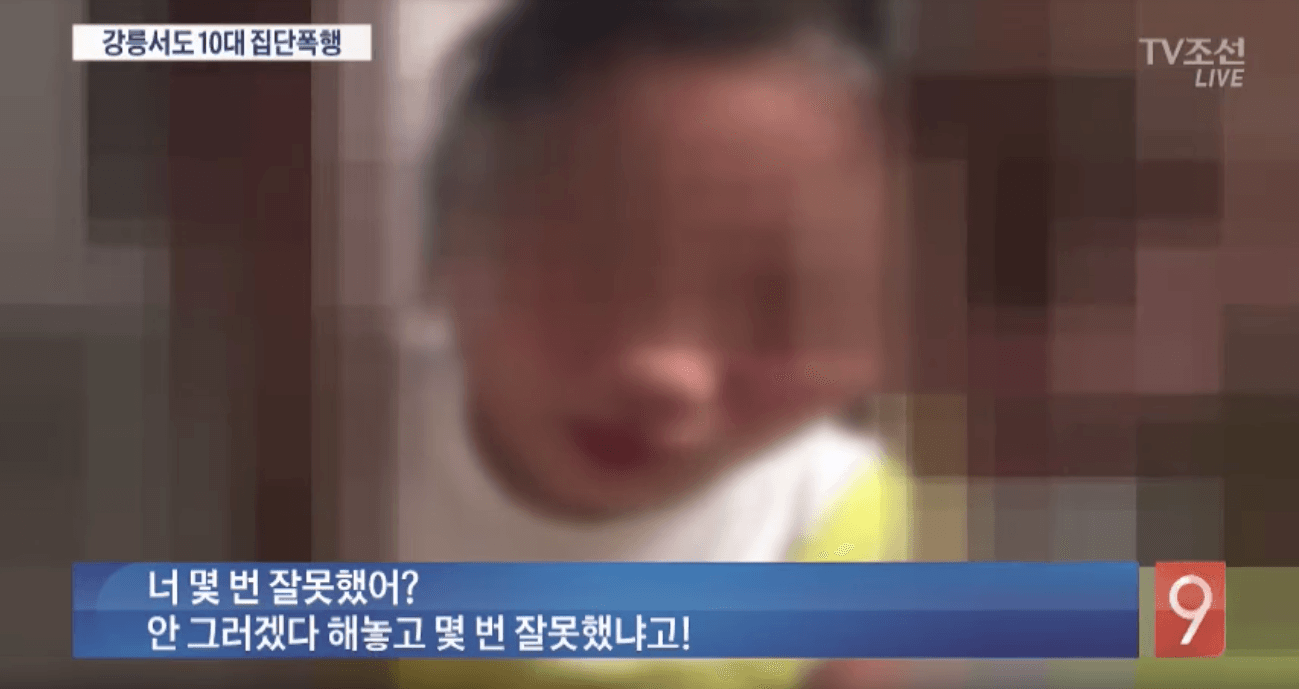 After the assault, a police report was made by the victim’s family on July 18 but no progress was made by the authorities until the Busan attack happened and public outcry regarding Juvenile Delinquency became a hot topic.

Even though the report was made nearly 3 months ago, authorities have so far only called in one suspect on September 5 while the other perpetrators aren’t being investigated at all.

Authorities are being further criticized for not handling the investigation with care because they had zero knowledge of the assault video for this case.

‼️WARNING: The video is very violent and disturbing.

Even though the assault video circulated around social networks and that’s how the assault came to light to the public, the authorities had no idea such a video existed.

The authorities finally realized there was a video nearly 3 months later when the victim’s family personally gave them a copy. 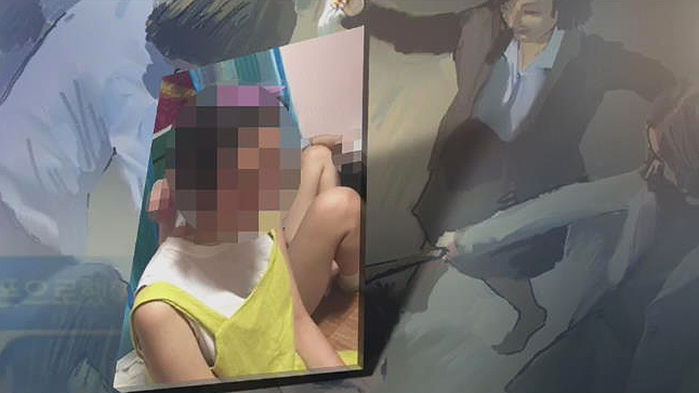 After receiving the video nearly 3 months late, authorities are now analyzing the assault video and finally investigating the suspect’s phones to see if there are more photos or videos of the attack. 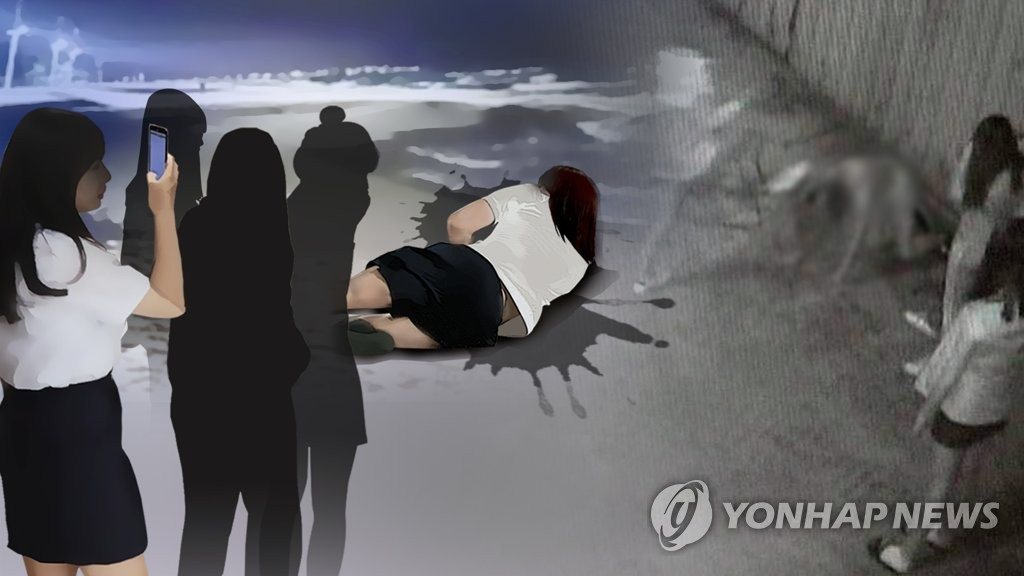 Just Days Ago, A 14-Year-Old Student Was Attacked By Bullies In Busan, South Korea