South Korea made international headlines when they announced that they would be resuming their audio broadcasts to North Korea.

After halting their broadcasts in order to ease tensions between the two countries, South Korea has decided to resume the program after North Korea announced that they had successfully tested a hydrogen bomb.

In addition to broadcasting announcements that included condemning North Korean leader Kim Jong Un and his nuclear bomb testing, the South Korean government revealed that they would also be broadcasting songs to the north as well.

Of the songs being broadcast, it was revealed that several K-pop songs would be played, including Lee Aeran‘s “100 Years of Life,” Apink‘s “Let Us Just Love,” G-Friend‘s “Me Gustas Tu,” and BIGBANG‘s “Bang Bang Bang.”

Netizens applauded the government’s song choices, but also recommended some of their own favorites to play to their North Korean neighbors. 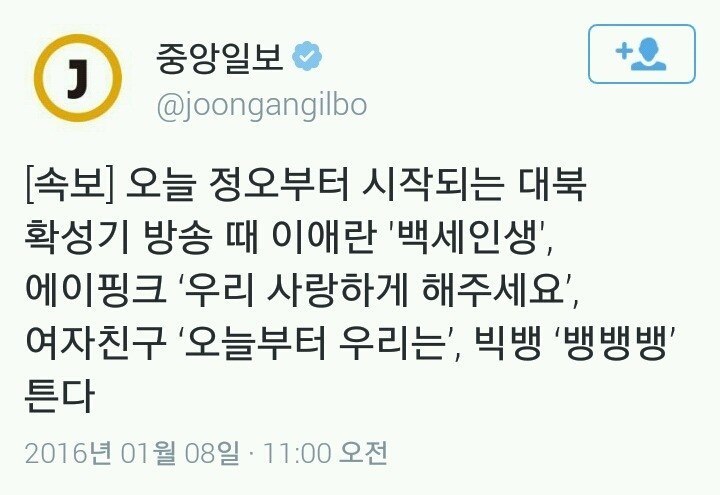 [+ 321, – 10] Bang Bang Bang is funny as heck but I find APink’s song funny as hell ㅋㅋㅋㅋ the lyrics go “Please let us love, let us not fight, what did I do wrong you’re always pouting” ㅋㅋㅋㅋ

[+ 97, – 0] I can just imagine people in Pyeongyang humming the songs under their breath looking around cautiously after a while ㅋㅋㅋㅋ