Despite both having just debuted last year, TWICE and G-Friend have become two of the most popular idol groups in the industry.

And while both groups have impressed fans with their incredible music and charming personalities, a post on Pann claimed that they debuted under incredibly different circumstances, claiming that TWICE had a much easier time because they belong to JYP Entertainment. After seeing the post, however, netizens came to TWICE’s defense, explaining that although G-Friend’s agency Source Music isn’t one of the top 3 agencies in Korea, they have definitely provided significant resources for the group. 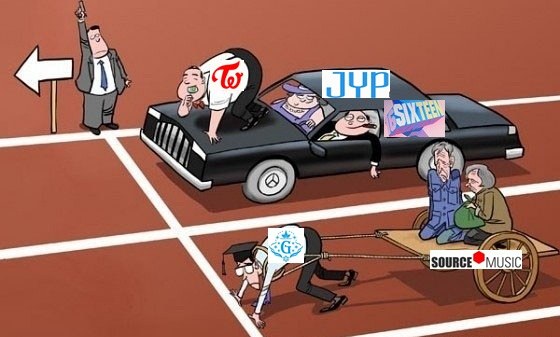 [+ 180, – 18] Ya right Source music only looks small they’re basically a huge company. Yerin appeared in Running Man right as soon as they debuted.

[+ 93, – 9] Sure sure. But going into a big company is an individual’s achievement in itself. They made it huge from a smaller company anyway so why the comparison?