After unveiling her new short hairstyle on her reality show, Girls’ Generation’s Hyoyeon gave fans a peek of what her fellow group members had to say.

However, netizens eyes again proved their might as a close up of her KakaoTalk chat with the girls has garnered much buzz.

As translated, the chat reads: 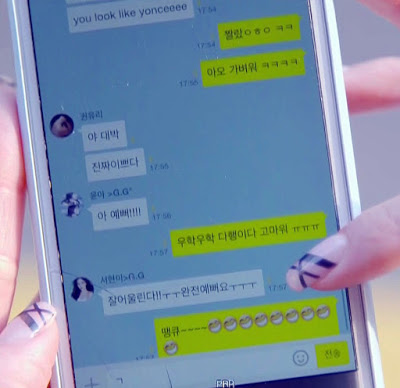 Despite the warm responses regarding her new hair cut, netizens had mixed reactions about the group chat and Hyoyeon’s labeling of the girls’ names in her phone. While some felt that the tone among the members was rather cold and distant, others disagreed and stated the conversation was normal.

See what they had to say here:

1. [+273, -27] Why does Hyoyeon have Yuri’s name saved with her last name ㅠㅠㅠㅠ?
– They’re either super close or not close at all ㅋㅋㅋ You know how some super close friends call each other with their last names too
– Or Yuri left Katalk and joined back recently
– Maybe Hyoyeon knows someone else who already uses the name Yuri in her Katalk
– Hyoyeon actually seems the closest with Yuri though
– They both have tomboyish personalities and look close, I call my best friend with her last name too
– Orrr Hyoyeon already knows people with the names Seohyun and Yoona in her phone so she has to change the SNSD members to include GG

5. [+50, -4] SNSD has always talked like that with one another. When TaeTiSeo released their second mini, they showed their group chat where Sooyoung said “I like the song!” and Yuri was like “I highly recommend Me to You!” and Im Yoona was like “I like Eye too!!” They talk like this regularly ㅋㅋㅋ It’s unfair to judge their relationships based on one caption of a conversation. If they really weren’t close, they’d act fake on broadcast but they’re always busy joking around and dissing each other.