Here is the direct translation of the post and comments below! 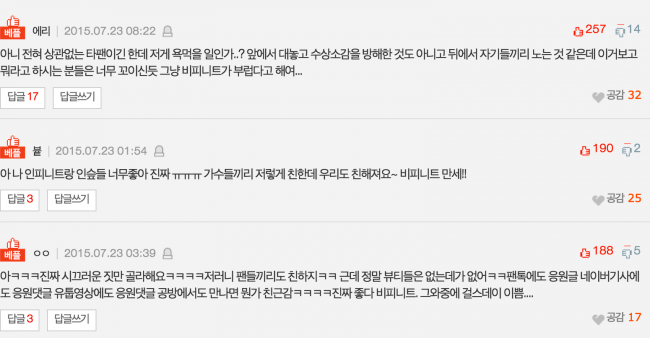 [+257, -14] I’m not a fan of either group but is that worth any scorning..? They’re not disturbing anyone receiving the award but just playing by themselves in the back. People who are saying something about it, please just say you’re jealous of BEFINITE…

[+190, -2] I love BEAST and INFINITE 🙁 I think fans should get close too since they’re so close. BEFINITE fighting!

[+188, -5] Ah hahaha They always do stuff that get attention hahahaha That is why even fans are close haha BEAST and INFINITE fans are everywhere haha Fan talks, article comments, and even in the YouTube comment section. They are very friendly even when you go watch shows. hahahaha I really like BEFINITE. Girl’s Day members are meanwhile pretty….

8 Idols Who Were Born For Dark K-Pop Concepts