M.I.B’s Young Cream sends out an official apology after receiving criticisms with regards to his recent SNS updates about the Korean flag.

On February 6th, Young Cream shared his sentiments about the Korean flag though his personal Twitter account saying, “Personally, i don’t really like the red colors on our flag when I become president later, I’m going to change it ^.~ You know what the color red means in the hakencroitz and the imperial flag. It makes no sense for it to be on our proud flag doesn’t it? I can’t lie,” along with his own preferred version of the flag.

Despite warning from his fans, which was soon followed by a number of criticisms online, he went on to share his thoughts on the matter and was evidently quoted saying, “I’ve never been a hot topic and I was so sad I wish i can ^.~ oh by the way the people around me don’t really care. They don’t care and they’re doing well.”

However, a day after the original tweets were posted, Young Cream posted an apology on his Twitter account, eventually deleting the previous tweets pertaining to the flag. On a series of texts o his personal account, he states that, “I am sincerely sorry. I wasn’t trying to damage the Korean flag at all, but I was being too emotional and not thinking things through. I am sorry if I caused worry. I know what I have said cannot be unsaid and I have made many people uncomfortable I will use this instance to mature. And I will use this opportunity to become someone who can benefit the nation. I’m thankful for all the people who trusted me and I will accept all criticism. I am the sole one responsible for my actions and I even hurt fans who were trying to correct my behaviors.”

Meanwhile, since their last album The Maginot Line released last year, M.I.B have been focusing in their individual activities with member Kangnam gaining much attention for his variety show appearances. 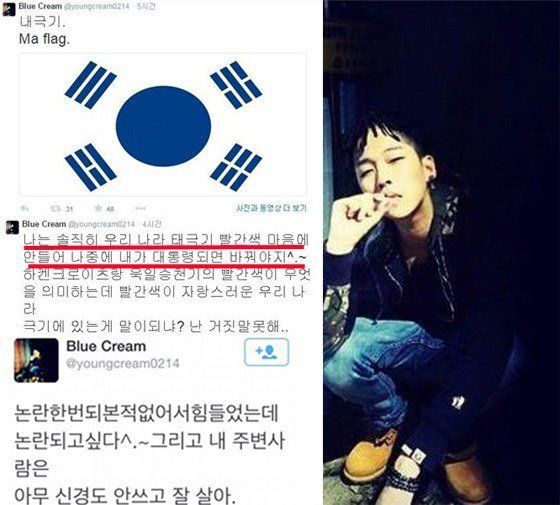